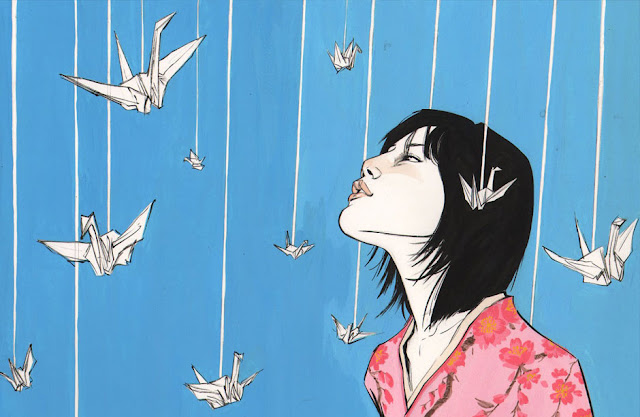 Shortly after 1994’s Peace Day commemorations in Hiroshima’s Peace Memorial Park, we happened upon a wonderfully poignant scene. Thousands and thousands of folded paper cranes had been laid around the Children’s Peace Monument. The heap was as high as our heads and fifty feet long. Atop the domed memorial a likeness of Sadako Sasaki reached skyward, her arms holding the metal outline of a paper crane high above her head.

Twelve-year old Sadako Sasaki had a dream – to be the best runner in her class. They say she never lost a race. But one day, she started to get sick. At first she tried to keep it a secret from her family, but that didn’t last long. They took her to the hospital to get the most frightening news…

Sadako was only two years old when a sudden explosion near her home blew her out of the window. Thinking she was dead, her mother ran out to find her, but found her alive. She looked up to see about a mile away a giant mushroom cloud boiling six miles up into the sky. The landscape was utterly devastated – flattened houses, snapped trees, bent flag poles – with flames already licking the air. People were crying and dying before her eyes. Sadako’s mother fled, carrying her daughter, but they couldn’t escape the “black rain.”

It was August 6, 1945, the day an atomic bomb was dropped on Hiroshima – the day when everything changed — not only for the world, but for Sadako. Only she didn’t know it…

She’d also been exposed to a radiation time bomb.

Nine years later, lumps began to develop on Sadako’s neck and behind her ears. She began to suffer from dizzy spells when she was running until the day she collapsed in front of teachers. Her parents took her to the hospital where she was hospitalized. The prognosis: leukemia with – at the most – a year to live. The lumps slowly grew bigger, making her look as if she had the mumps.

One story recounts the day her best friend Chizuko brought her some paper and showed her how to fold it into a paper crane. She told her about the legend of the origami cranes and the Japanese belief that if you could fold 1,000 cranes, you could have a wish granted. “I wish to live,” said Sadako as she began trying to fold her 1,000 cranes. She folded as many as the sickness allowed. Then she would string thread through them and her brother would hang them from the ceiling. She would say, “I will write peace on your wings and you will fly all over the world.”

Some days she just didn’t have the strength to fold them. Her friends would visit and say, “It’s time to rest. You can make more birds tomorrow.” Unfortunately, she only made it to 644 before she died, surrounded by her family. Following her death, her friends finished the remainder of the 1,000 cranes and buried them with her.

Her story was picked up by newspapers and published in Eleanor Coerr’s children’s book “Sadako and the Thousand Paper Cranes”. Later, inspired young people from all over Japan raised funds to build the Children’s Peace Monument in the new Hiroshima Peace Memorial Park. It was dedicated to Sadako and all of the children who had died from the effects of the atomic bomb. In 1958, a statue of Sadako standing on the Mountain of Paradise holding a golden crane was unveiled in the park.

Sadoko lost the race to save her life but she won the hearts of millions. To this day, children all over Japan and the world fold paper cranes and ship them to the park by the box load. On Peace Day (August 6th) thousands of them are placed at the statue’s base. At the foot of the statue is a plaque that reads:

“This is our cry. This is our prayer. For building peace in the world.”