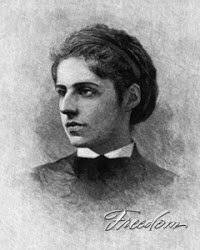 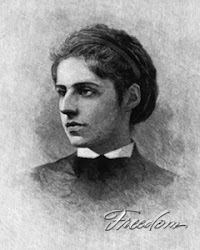 Not long ago, I watched a PBS documentary about the Statue of Liberty. To PBS’s credit, the plaque at its base was read verbatim.
“Give me your tired, your poor,
your huddled masses …”
However, no mention was made of its author, Emma Lazarus, who was a major Jewish American literary figure born in New York City.So I will; I feel I must because – as it turned out – my gentile daughter married into a family with Jewish roots. It happened at a time in my life when I was busily researching our own family tree. After her first son was born, I wanted to learn all I could about his roots. So, I set about meeting with his other grandmother, who said, “I have a book with a four-page genealogical chart inside of it. My parents and Emma Lazarus are both on it, but I’ve never been able to make the connection. Maybe you can.” With that, she gave me a copy of The Grandees: America’s Sephardic Elite by Stephen Birmingham (Syracuse University Press, 1971).

I took the challenge. The chart, although lengthy and detailed, was an abbreviated version of “America’s Sephardic Elite”, derived from Americans of Jewish Descent, an eight-pound tome containing 25,000 names traced as far back as the sixteenth century. It was compiled by Rabbi Malcolm H. Stern in 1960 and quickly became a “who’s who” of Jewish high society. After a lengthy study of my own, I finally made the connection; I traced my grandson’s ancestors twelve generations up to Moses Raphael Levy (b.1665 in Germany; d. 1728 New York City) and then eight generations down the other side to Emma Lazarus. It turns out that my grandsons (now two) were born into a great family, indeed!

In the process I felt as if I’d gotten to know Emma Lazarus as a real person. She was a descendent of Sephardic Jews fleeing the Spanish Inquisition who arrived in America even before the American Revolution – her father could trace his ancestry back to the first twenty-three Jews who settled in New York in 1654 on the “Jewish Mayflower“. Emma herself had received a classic private education and was very much an upper-class New York Jew,

But this all changed in the early 1880s when she first met Eastern European refugees escaping from Russia’s vicious anti-Semitic pogroms. It was bad enough that they were poor, sick, and uneducated, but worse; many American Jews in Emma’s own social circles seemed embarrassed by the unsophisticated Jewish refugees. They didn’t want to associate with these “different Jews.”

This infuriated Emma and awakened within her a renewed commitment to Judaism. Already an important figure in New York’s elite literary circles, she began to write passionate Jewish poems and essays and personally helped refugees with money, food, clothing and even training. She wrote “The New Colossus” in 1883 for a fundraiser auction to build a pedestal for the Statue of Liberty. This sonnet, in which America is depicted as the golden land of hope and opportunity for the oppressed, was auctioned in a benefit sale for $21,500, a sum unheard-of for a short piece of poetry. Emma Lazarus died only four years later, at the age of 38, most likely from Hodgkin’s lymphoma. In 1903, her poem was engraved on a metal plaque, and attached to the pedestal of the Statue of Liberty. 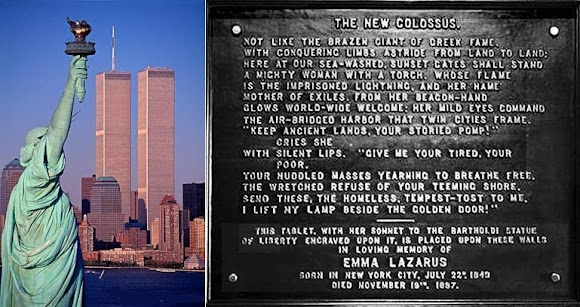