Remembering Scarlett’s “Tara” from Margaret Mitchell’s novel, Gone with the Wind, we planned to visit a place we’d always wanted to see, the fabled Hill of Tara, seat of the High Kings of Ireland.

We drove (crawled) endlessly that morning through fat rolls of fog. Suddenly the sun broke through and there it was – Tara! We were excited. 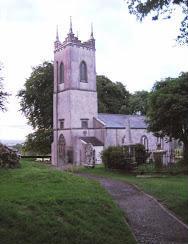 But it looked very closed.

We found a path leading up to a place marked on my map as Saint Patrick’s Church, used as a visitors center next to the site. The car gate was locked but the footpath was open so I lifted Anne’s wheelchair over the wall and we were on our way. A young man greeted us at the church.

“Oh, yes,” he said, almost sheepishly. “We’re open. Must’ve forgotten to unlock the gate.” He was friendly enough, but I think he was taking a nap. “The church is no longer a church,” he said, “but a visitors center. The tour includes a good audiovisual show as well. I’ll start it up for you.”

We sat in one of the church pews and he disappeared into the church somewhere. Suddenly, long black window shades began to lower on all the windows at once, shutting out the sunlight. Simultaneously, a movie screen lowered to the altar in front of us and, when all was ready, the show began. It was a good audiovisual indeed: Tara, Meeting Place of Heroes. The story unfolded like a dream; we learned that nearly two thousand years ago, Tara was the seat of the most powerful rulers in Ireland. Here the high king and his royal court lived in their ceremonial residence while they feasted and watched over the realm. They were gone now, but the sense of their commanding presence remained.

The show was especially good for Anne because it gave overall aerial views of the place and was about the only way she could see it. The Hill of Tara was grass-covered and bumpy, as we could see from the film, and not friendly to wheelchairs. Afterwards she looked longingly at the gentle sloping hill from the church door. She sighed “If I only had wings …”

The young man sensed her yearning for two good feet. “Sorry about that,” he said, almost inaudibly. Then he smiled. “Here, let me push you back to your car while your husband has a look around.” 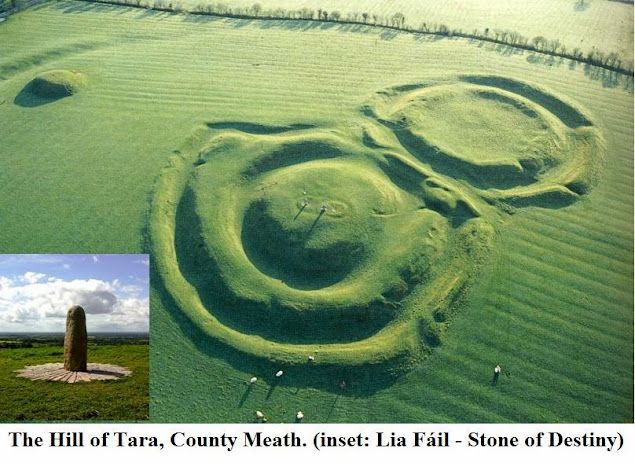 I wandered out into the wide meadows. We were together, Tara and I, three hundred feet above the plains of Meath. After fifty centuries of pagan rulers and powerful kings, I alone was left standing here this day; among the grassy mounds and depressions that once were Stone Age passage tombs, Iron Age forts, and ruined houses of kings. Fifty centuries of living had once filled the air with wild shouts of war and pagan revelry – later to be stilled by St. Patrick’s reverent voice of prayer as he baptized thousands here. Tara’s influence declined soon after Christianity took root in the country but more recently, in 1843, Daniel O’Connell, the “Liberator” and leader of the opposition to union with Britain, held one of his “monster meetings” here and drew a crowd of 750,000 people.

All were distant memories now. I stood alone with the fading echoes of the past. After one last look, I too, was gone.

(Excerpt from Wheelchair Around the World, by Patrick Simpson)