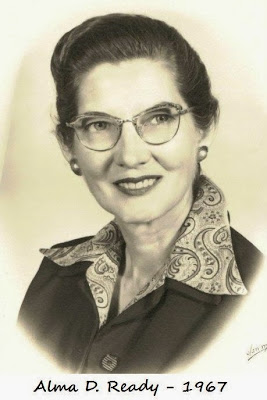 Posted by Patrick Simpson, Dec. 29, 2014.My Mom, Alma Ready, LOVED Arizona! In fact, she loved everything West. And she loved to write. She passed that love on to me, even though I barely knew her as a child. My parents divorced when I was only five and my father moved back East, taking my brother Jim and me with him. I didn’t see Mom again until I was twelve and then again when I was eighteen when – for a short time – I lived with her and Teddy, her fourth (and last) husband.I’d always resented having to grow up 2,400 miles from her. But we always wrote to each other. And sometimes called each other. She sent pictures of the West and I would look at them. She wrote stories of the West and I would read them. She was a photo-journalist – and a good one I might add. She contributed to newspapers such as the Arizona Republic, the Nogales International and – most spectacularly, I must add – Arizona Highways Magazine, the “official source for Arizona travel information, stunning Arizona photography & unique feature articles.”

One day, while trying to put together a portfolio of pictures of Santa Cruz County for the Arizona Republic, she learned from a Nogales librarian that – much to her surprise – the county’s history had never been written. So, “to do the job right,” she wrote, “I needed to live in Santa Cruz County!”

So, at age sixty, she moved south from Tucson to Nogales where she researched, wrote and photographed everything West, even doing a series of picture pages for the Arizona Republic’s Sunday Magazine, “Days and Ways.” She published her county history, Open Range and Hidden Silver, in 1973. It was followed by Calabasas: A True Story in 1976 and A Very Small Place in 1989 – as well as much more. 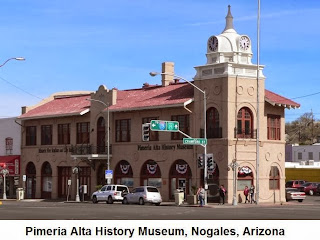 Nogales never knew what hit it. Soon after becoming president of the Pimeria Alta Historical Society, she realized it needed a great deal of space for a museum. After learning that the old Nogales City Hall was available, she ram-rodded a successful effort to move in. Today it occupies the entire bottom floor!

Meanwhile, after years of separation, I’d actually written a draft version of my first book. Not knowing what to expect, I called her and asked, “Mom, would you proofread it for me?” Without hesitation and much to my relief, she said “Yes.” So I mailed it to her and she returned it, section by section, with all changes, suggestions and errors meticulously written or underlined in red. From that moment on, we became “buddies.”

I would visit her while on business trips from Raleigh and we even did the three-mile round-trip hike at Fort Bowie National Historic Site. (She was in her eighties!) She wanted to show me her West and did so over the next few years. My wife joined me more than once as I drove while Mom navigated – from Nogales day trips into Mexico to overnight trips north to Navajo country and Lake Powell. Mom was tireless! And by now, Teddy had died but she already had a new boyfriend.

The last time I saw Mom was at a nursing home in Nogales; she was 95. But, on May 29, 2003, Mom died. I’ll never forget her memorial service, held on the bottom floor of the very museum she’d helped found. Even though she’d outlived most of her contemporaries, over forty people – friends, admirers, co-workers, several young people – came to pay their respects. The museum’s large research library was dedicated and renamed the Alma D. Ready Library. In a special presentation a beautiful stone plaque, created by Mexican artist “Alonzo”, was mounted at the library entrance. It featured a windmill taken from one of Mom’s photographs.

I’ll be forever thankful to then society president Axel C. F. Holm, who did an incredible job of arranging the service.

Mom had many friends and was a lover of art, music, poetry and everything Arizona. She will be deeply missed by her family and the many people whose lives she has touched over the years. About Nogales she wrote: “I have been very happy here. The country is beautiful, the ‘Border Culture’ fascinating, the people friendly, and the climate near-perfect. This is where I feel at home.”

They say that home is where the heart is and Mom’s heart had indeed found a home – in a place called Nogales. And my heart has found forgiveness – and love. In the words of Jesus: “honor your father and mother…” (Matthew 19:19, NIV). I love you Mom!
–  Patrick D. Simpson